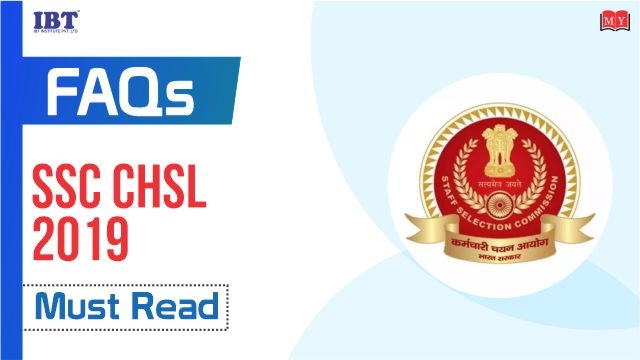 In this post we are going to provide you with some of the Frequently Asked Questions about SSC CHSL 2019.

Answer:Staff Selection Commission-Combined Higher Secondary Level (SSC CHSL) is a national-level level exam conducted by SSC every year. The exam is conducted to recruit eligible candidates for the below-mentioned posts in various ministries/departments/offices of the Government of India.

5. For how many vacancies is the SSC CHSL exam usually conducted?

Answer: The number of vacancies for which SSC CHSL exam is conducted usually varies every year. In 2018, the commission released total 5,789 vacancies.

Answer: No, candidates from 18-27 years of age are only eligible to apply for the exam.

7. Is there any age relaxation in the eligibility criteria for Scheduled Caste (SC)/Scheduled Tribe (ST) candidates?

8. What is the application fee for SSC CHSL exam?

9. How many Tiers does one need to clear in order to qualify the SSC CHSL exam?

10. What is the minimum eligibility criteria for SSC CHSL exam?

Answer: Candidates need to clear class XII from a recognised board in order to be eligible for the exam.

11. Is there any negative marking in SSC CHSL exam?

12. How many times is SSC CHSL conducted in a year?

Answer: Each Tier of SSC CHSL exam is conducted once a year.

13. Is it mandatory to appear for all the Tiers of SSC CHSL exam?

Answer:Yes, candidates need to appear for all the Tiers of the exam in order to qualify the SSC CHSL exam