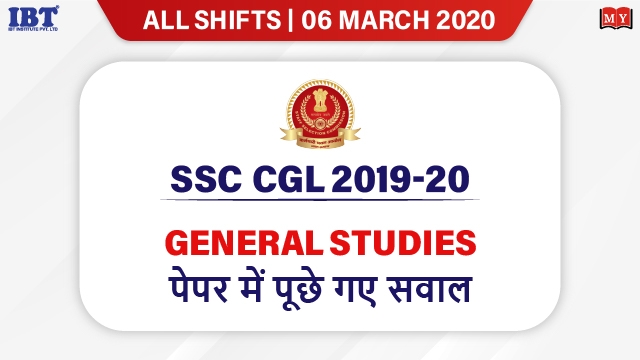 General awareness section generally gives a tough time to aspirants. Questions from Current affairs are mainly asked in the exam covering the majority of the portion. Here are Some of the exact questions asked in SSC CGL 2019-20.

1. Noorjahan was the wife of which ruler?
Ans.Jahangir
2. Who got the India’s most powerful women in media award?
Ans.Kallie Purie
3. Which article states that access to the internet is a fundamental right?
Ans.Article 19
4.The highest scorer of the women’s T20 World Cup belongs to which country?

7.Jayakwadi Dam is located on which river and in which state?
Ans.Godavari , Maharashtra
8.Vikram Smavat started in
Ans.57 BC
9. Who gave CR formula?
Ans.Rajagopalachari
10.Who won Junior under 19 wrestling championship?
Ans.Deepak Punia
11.What is the effect of the increased inflation?
Ans.increase in Repo Rate
12. Article 368 of the constitution deals with which of the following?
Ans.Constitutional Amendment
13 What was the name of the revenue system of Marathas?
Ans.Sardeshmukhi
14. Battle of Chausa was faught between which of the following?
Ans.Humayun & Sher Shah Suri
15. In which year NABARD was  established?
Ans.1982
16. Which of the following is in the Madhya Pradesh?
Ans.Bhimbetka
17. Ramanujam award is related to which field
Ans.Mathematics
18. Who got BCCI life time achievement award for women?
Ans. Anjum Chopra
19. What is the other name of food pipe?
Ans.oesophagus
6 likes | 0 comment
Like Comment Share