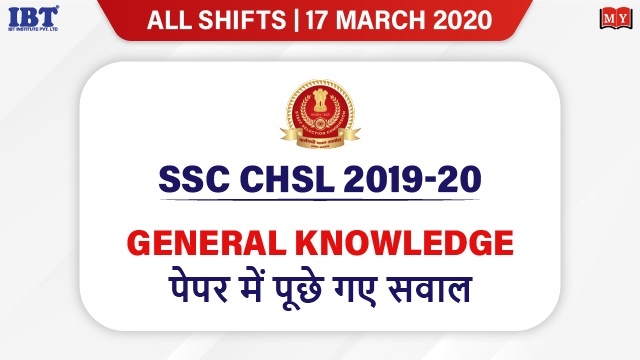 General awareness section generally gives a tough time to aspirants. Questions from Current affairs are mainly asked in the exam covering the majority of the portion. Here are Some of the exact questions asked in SSC CHSL 2019-20.
1. Who is the current chairman of BCCI?
Ans: Sourav Ganguly
2. Which of the following are water-soluble Vitamins?
Ans: Vitamin B & C
3. Which is the largest river island in the world?
Ans: Majuli Island
4. Flagella is a locomotive organ of which of the following?
Ans: Protozoa/ Bacteria
5.Where is the tomb of Sher Shah Suri located?
Ans: Sasaram, Bihar
6.What is the number of base units in the international system of units?
Ans: Seven
7.What is the weight of Chandrayaan 2?
Ans: 2379 kg
8.Which of the following rulers belong to the Chola dynasty?
Ans: Rajendra Chola, Raja Raja Chola
9.How many seats are there in UP’s Lok Sabha are there?
Ans: 80 seats
10. Who is CEO of YES Bank?
Ans: Ravneet Gill
11.International Ozone Layer Day celebrated ?
Ans: 16 September