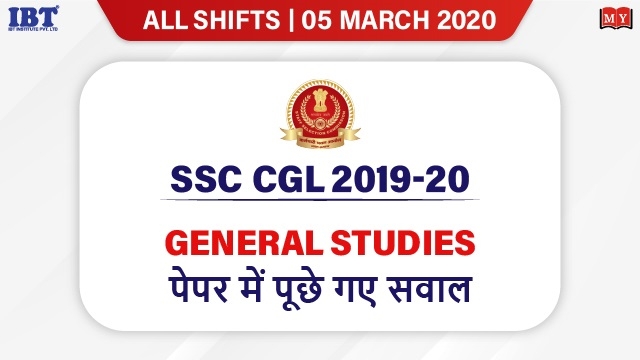 General awareness section generally gives a tough time to aspirants. Questions from Current affairs are mainly asked in the exam covering the majority of the portion. Here are Some of the exact questions asked in SSC CGL 2019-20 5th March exam:

1.Quit India movement was started from which place?
Ans.Bombay
2.What is the railway helpline number?
Ans.139
3.which award did Jaspret Bumrah got recently
Ans.Polly Umrigar Award
4. Which law states that equal volumes of gases at same temperature and pressure have same number of molecules
Ans.Avagadro’s Law
5. Which state has maximum forest area
Ans.Madhya Pradesh
6. Which is the largest national park of Himachal Pradesh
Ans.Great Himalayan National Park
7. Which colour light is emitted by the sun
Ans.White

8. What was the theme of the Indian Science Congress held at the Bangalore
Ans.Science and Technology: Rural Development
9. Who was the first ruler of Mahabalipuram ?
Ans.Narsimhavarman 1
10. Which state got the best police station award
Ans.Andaman & Nicobar Islands
11. Which is the hardest part of the human body
Ans.Tooth Enamel
12. Lohit and Dibang river are the tributeries of which river
Ans.Brahmputra
13. Amer fort was built in which river
Ans.1592
14. Who built Alai Darwaza
Ans.Alaudin khalji
15. Who is the Lt Governor of Jammu and Kashmir
Ans.GC Murmu
16. Which vitamin deficiency lead to anemia
Ans.Vitamin K
17. In which year Gadar Party was formed
Ans.1913
18. Which article is related to national commission for backward classes?
Ans.338-B
19. Part 8 of the constitution deals with which topic
Ans.Union Territories
20.Homogenous mixture of two or more compositions
Ans.Solution
21.Which city in Rajasthan is called the Golden  City
Ans.Jaisalmer

22.Indus water treaty was signed in which year