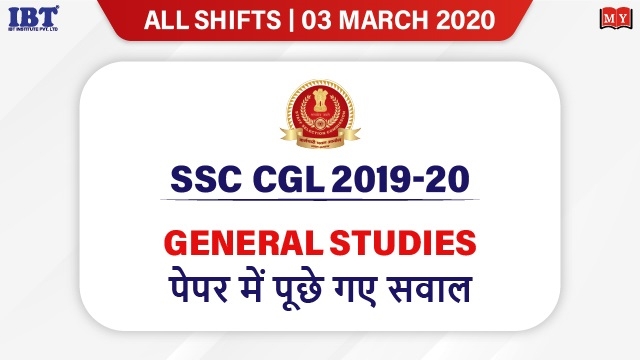 The general awareness section generally gives a tough time to aspirants. Questions from Current affairs are mainly asked in the exam covering the majority of the portion. Here are Some of the exact questions asked in SSC CGL 2019-20 3rd March exam:

1. Who is the Chief Minister of Punjab?
Ans. Captain Amrinder Singh.

3. Who got Noble Prize for Discovery of Neutron ?
Ans. James Chadwick

4. Who is the President of Sri Lanka ?
Ans. Gotabaya RajaPaksa.

5. Who is the Chief Minister of Chhattisgarh?
Ans. Bhupesh Baghel

6. Who is  Founder of Gupta Dynasty?
Ans. Sri Gupta

7. Who is the Chief Justice of India?
Ans. Sharad Arvind Bobde

9. Who got Padma Shri in Archery?
Ans. Bombayla Devi Laishram

13. Who is the Author of An Era of Darkness ?
Ans.Shashi Tharoor

14. Where is Humpy situated?
Ans. Karnataka

20. Wings India 2020 to be held at which airport
Ans.  Begumpet Airport, Hyderabad

22.Who is Last ruler of nanda dynasty?
Ans. Dhana Nanda

23. Ajatshatru is the son of.
Ans.Udayin

25. Which gland is present between lungs
Ans. Thymus gland

26. Industry 4.0 launched with the help of which institute?
Ans. IIT Kanpur

27. Who got the Dadasaheb Phalke Award 2019?
Ans. Amitabh Bachchan

29. Who is the President of BCCI?
Ans. Sourav Ganguly
30. Who is the last Ruler of Gupta Empire
Ans. Vishnu Gupta
31.Who is the PM of  Bhutan ?
Ans. Lotay Tshering